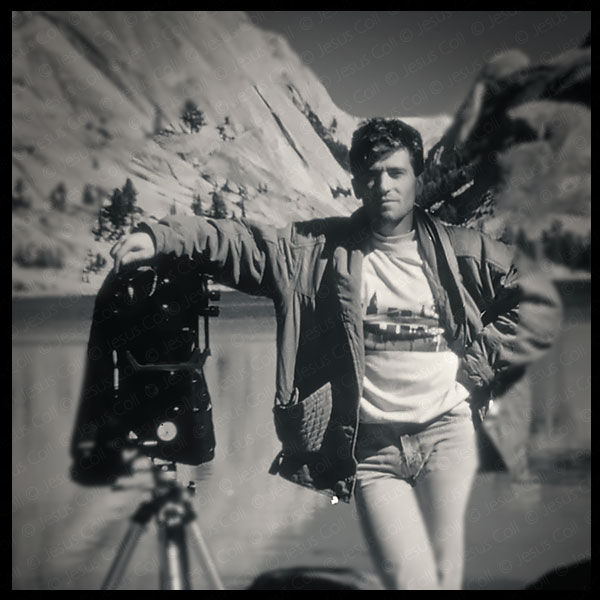 Jesus Coll (Mataró, Barcelona 1957-) gets interested in photography from his childhood, watching his father taking family pictures with that old bellows camera.

In a local camera club, he soon starts developing his own negatives and printing his first awful prints on that darkroom’s club.

The few club members that their photography stood out from the crowd, were very scarce explaining the process to accomplish it. This fact was quite frustrating, specially for a youngster hungry to learn. So many secrets and the fact that photography was considered a way of competition, made him resign.

It took him a very long way since he got the information to produce a fineprint. Internet came many more years thereafter. So, he bought lots of magazines, especially foreigners, to learn reading the images that were made outside that still gray Spain, in the last years of Franco. He thought that developing a good reading ability of the images created by others would be the basis for developing a good writing ability for their own photographs.

Finally, in 1985 he could travel to California and visited The Ansel Adams Gallery in Yosemite which left him very impressed. He watched for first time what a fineprint looked like, as well as learning about the zone system of exposure and development.

His first experience, photographing the American west with a very heavy, monorail, view camera was extraordinary. It was often to found other colleges whom to start a conversation about everything, photography related or not. The open character of the Americans then, provided pleasant situations for the traveler. It was not rare to they give you their address or phone number in order to visit them, when you were in their area, as that photographer in Moab who opened his darkroom, so he could change the film plates more comfortably.

Jesus Coll could be considered a FWD photographer with multiple interests and skills that allow him to deal with most diverse situations. A proof of it is shown here, on this eclectic website.

He currently lives in a medium, still quiet city, over the sea, close to Barcelona (Spain) and for a living he runs the fineart printing shop GraficArtPrints.

Occasionally he has given speeches about the zone system and taught fine B&W printing in the UPC University of Catalonia.